Blue and White and Colonial Embroidery 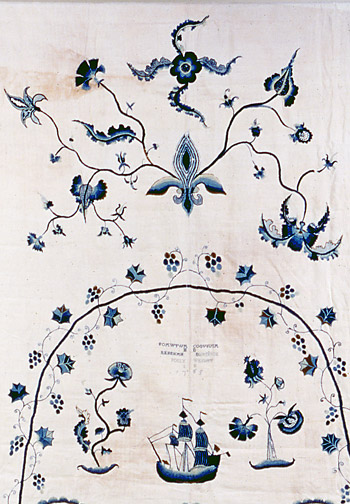 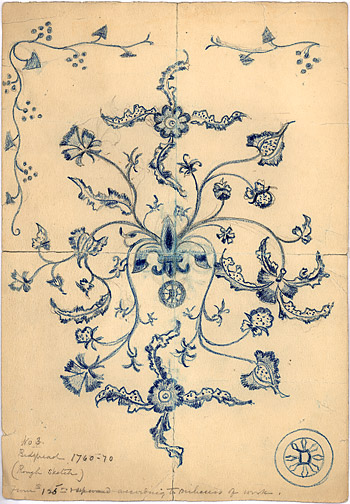 Deerfield Society of Blue and White Needlework designer Margaret Whiting, adapted a section of a head cloth stitched by Rebekah Dickinson in the 18th century. As Blue and White Society designs would do again and again, Whiting focuses her attention on just a few of the motifs appearing in Dickinson's larger work. The symmetrical and balanced detail shown here holds a centralized but relatively small space in Dickinson's original design. Margaret Whiting transforms the motif into the dominant focus of her drawing by maintaining its centralized location within the composition and by increasing its scale. She likewise enlarges the visual presence of Dickinson's fanciful wandering floral vines by increasing their number and by directing their movement to more closely envelop the central fleur de lys from which they emanate. By repeating Dickinson's imaginative compass rose motif at the base of her floral composition, Whiting adds balance, weight and harmony to the whole. Many future Blue and White Society embroideries will feature designs with a central focus and marked overall by the qualities of harmony, balance and rhythm. These characteristics are features which Margaret Whiting and Ellen Miller found in the 18th-century embroideries which they sought out and studied in the early years of their collaboration.