Throughout the years of the Deerfield Arts and Crafts movement, Mary Allen, and her elder sister Frances, were nationally-recognized pictorial photographers working and living in Deerfield. They documented the movement with their cameras, and routinely exhibited with its artisans. Mary Allen was especially active in her support of the efforts of the Deerfield Arts and Crafts movement. At first, Mary set photography aside to immerse herself in the concerns of the Deerfield Society of Blue and White Needlework. She both designed its trademark seal (a 'D' superimposed onto a flax wheel), and was one of the organization's first embroiderers. Mary also played a central role in the day-to-day operations of the Society of Deerfield Industries, serving as its treasurer for most of the years between 1901 and 1919. She was still on its executive committee in 1923. Mary wrote articles promoting the Deerfield Arts and Crafts, and the numerous other publications devoted to the movement, not written by Mary, were almost always illustrated with Allen sisters' photographs.

Born in Deerfield, Massachusetts, Mary, like her sister Frances, was trained to be teacher. As the result of chronic health problems, Mary taught only intermittently between the years 1876 and 1885. Both Frances and Mary eventually lost their ability to hear, and were forced to stop teaching. The Allen sisters began to pursue photography by the mid 1880s, and by 1888, their photos were being commissioned to illustrate magazines and books. Ever a champion of her community, Mary Allen's article, "Old Deerfield," published in the September 1892 issue of the New England Magazine, encouraged tourists to visit the historic town. In 1895, Mary and Frances moved into their family's ancestral home on the Street in old Deerfield. Here tourists could visit the sisters and purchase prints of their photographs.

Like the work of many of their fellow Deerfield Arts and Crafts artisans, the photographs of Frances and Mary Allen show an interest in the colonial past. As Mary put it in a piece devoted to the Deerfield Society of Blue and White Needlework, "Deerfield, Massachusetts, has long been known to the student of history as an interesting link between the past and the present. Belonging to both periods, and to neither entirely, the transition from old to new can be traced almost continuously."1 Mary Allen was known for her landscapes and portraiture. 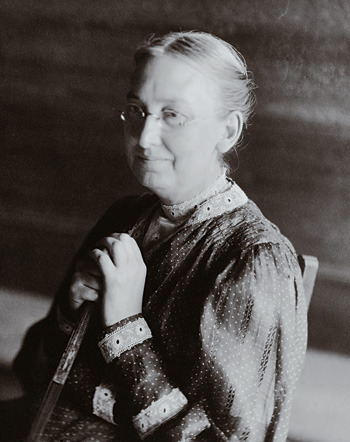