Between 1911 and 1936 weaver Eleanor Arms worked and greeted customers at her shop The Loom located in her home, at the south end of the Street in old Deerfield. The house had been built by the Arms family in 1872. Eleanor created woven rag rugs, couch covers, blankets with Navajo-inspired designs, portieres, and palm leaf baskets.

While it seems that for Eleanor weaving had always been as much a labor of love as it was for profit; during Eleanor Arm's final years, which coincided with the Great Depression, her income and her spirit steadily declined. Her annual sales descended from about $650 in 1928 to just $277.21, which included a $35.00 sale to First Lady Eleanor Roosevelt in 1935. In December of that year Eleanor Arms confided to her diary, "I wish I had a little more to do with. I almost count the matches. I only spent 5 cents this week, a paper and a yeast cake, but I have everything I need, a cosy warm place, and things to do. I also have broken glasses, a sore toe, a tooth or two [that need a dentist's treatment], and remains of a cold. Oh, well!"1 She had reached a crisis point by the next year, "I'm just about at the jumping off place. No money, no customers no prospect of anything. I am just in a plain hole and worried to death."2 Seventy-two year old weaver Eleanor Arms died in January 1937. 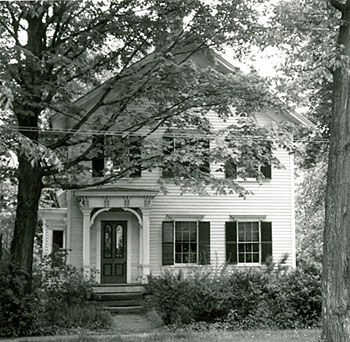 Home of Eleanor Arms and her shop The Loom, by Charles Baldwin, c. 1945.