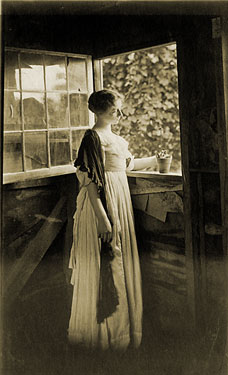 Framed in darkness, the subject of the Allen sisters' photograph titled Constance gazes at the exotic bloom of a native pitcher plant, her figure illuminated by the subdued light of an open window. The photographers enhanced this quiet, contemplative state through stylistic and technical choices including the physical and temporal setting, and their use of the platinum print, which allowed for tonal richness. The image is of Smith College student Constance Charnley (1880-1914) who spent summers in Deerfield. Basketmaker Gertrude Ashley's memory of Constance suits her portrait, "Miss Charnley had no home, and the quiet country life appealed to her. She often sang in church...as familiar with the music as to require no notes. After leaving college, she was a teacher for a while. Later she went to some distant country as a companion to a lady, and became ill and passed away. Knowing her love for Deerfield, her friends arranged for her burial in Laurel Hill Cemetery."1 This statement understates Constance's active professional life. She taught English at the Brearley School and at the eventual Chapin School, both in New York City, and published a paper on the "...Conditions and Treatment of Stuttering," (1913) after her work in the Boston Psychopathic Hospital's Voice Clinic.