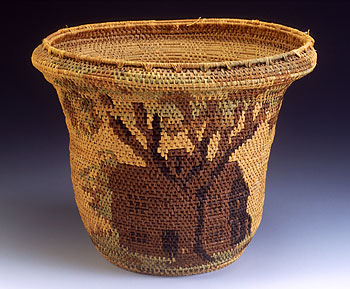 In 1848, when future Pocumtuck Basket Maker Sarah Cowles was three years old, Greenfield, Massachusetts artist George Washington Marks preserved the Old Indian House on canvas. At the time, the building was the oldest house in Deerfield, and the sole remaining survivor of the famous, February 1704, French and Indian raid on the town. Despite one of the nation's first historic preservation efforts, the Old Indian House was torn down shortly after Marks finished painting it. In the early 20th century, when Deerfield's history drew thousands of tourists to town, all that remained of the Old Indian House was its door, displayed in Memorial Hall, and the numerous painted, printed, photographic, stitched and even textile representations commemorating the fondly-remembered building. Sarah based her Old Indian House basket on George Washington Marks' painting.