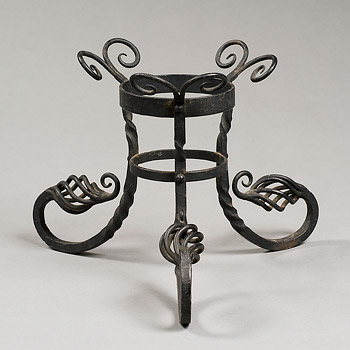 Like leaves unfolding from a tender seedling, the organic finials emerging from the iron legs of Cornelius Kelley's Fern Stand seem to swell and grow. In colonial America, the implements created by the village blacksmith were primarily functional, useful for house and farm work. Crafting within this tradition, Cornelius Kelley fashioned candleholders, wrought iron fireplace sets, and other useful domestic objects for his early-20th-century clientele. The pleasing lines and satisfying naturalism of Kelley's style suggest his own response to the Arts and Crafts call for beauty, in addition to practicality. As one spokesperson for the movement stated: "life is an adventure, quite worthy of the superlative....to inhabit the most beautiful house; to work in the most charming garden; to produce the most admirable wares; to establish with others the most ideal relations,--this is the formula for a daily life into which the philosophic idea literally translates itself."1