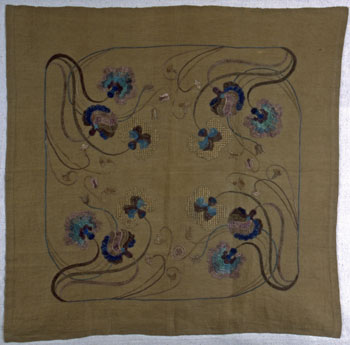 With dusky hues, mesmerizing lines, and a composition that settles into the unlikely logic of a dream, the Deerfield Society of Blue and White Needlework's Nocturne is true to its title. Stylistically, the piece evokes a middle world between the aesthetic of 18th-century American embroidery and the modernism of the early 20th century. The work thereby suggests the features of each to which designers Ellen Miller and Margaret Whiting were attracted. Nocturne's meandering flowers are clearly the descendants of the abstracted and imaginative blooms stitched by colonial embroiderers, in this case Ruth Culver Coleman's carnations from her mid-18th century counterpane now owned by the Metropolitan Museum of Art. Coleman's sinuous, growing stem, on the other hand, has been transformed into the very definition of the hypnotic, dancing Art Nouveau line omnipresent at the dawning of the 20th century. This piece was designed and was perhaps stitched by Margaret Whiting.