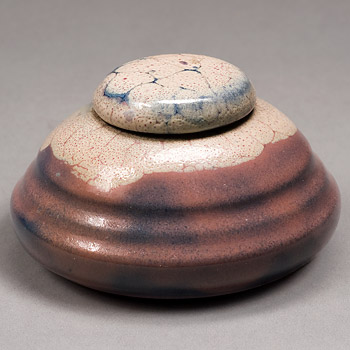 The substantial, grounded appeal of Chauncey Thomas' covered container is supported by the work's rich earthy glazes, deeper and heavier at the base, and lighter, but equally naturalistic, on top.

In recommending Chauncey Thomas for a position at the Newcomb Pottery at Tulane University, his teacher Charles Fergus Binns stated that Thomas "has considerable artistic ability and has also made a special study of the composition of clays and glazes."1 Both Binns and Thomas fired their work in high-temperature kilns. This process afforded them a special aesthetic opportunity. "The high temperature employed" Binns explained, "makes it possible to obtain interesting effects from certain rare oxides which do not function at the lower fire used for faience...while the coloring oxides...can be combined in almost endless variety."2