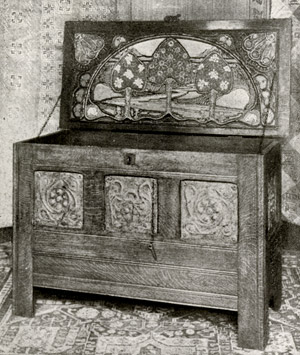 Annie Putnam believed that Madeline Yale Wynne was happier with the decorative scheme of her bride's chest, The Garden of Hearts, "than anything she [Madeline] had done."1 Wynne described the interior lid's optimistic landscape, to an audience of Good Housekeeping readers, as a scene of "three trees, two bear orange blossoms, one fruit. The river of life flows through the garden and the web of circumstances, some of earth, some heaven-born, binds all together."2 Three winsome trees, tops comprised of upside down hearts, form an emphatically balanced and perpetually harmonious focus for her landscape. Low relief panels, alive with the controlled abandon typical of Madeline Yale Wynne's work, are carefully contained outside the bounds the chest's central idyllic scene. Her statement about another Deerfield Arts and Crafts bride's chest reveals her own, mature perspectives on marriage, and perhaps lends focus to what The Garden of Heart's ultimately suggests. The Bride's Chest by Edwin Thorn and Caleb Allen she wrote, "guarantees permanent usefulness: decrepitude will never overtake this bride's chest, whatever time has in store for the bride."3

Wynne based the construction and proportions of The Garden of Hearts on 18th century Connecticut River Valley chests. This photograph appeared in Good Housekeeping in 1903. The current location of the Garden of Hearts is unknown.