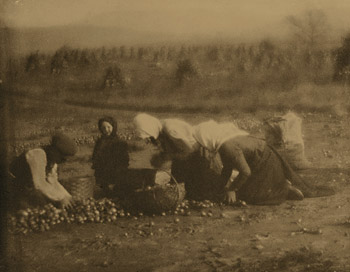 With faces obscured and earth-bound bodies bent below the horizon line, the workers in Mary Allen's The Onion Harvest bring to mind European representations of peasantry, such as Jean-Francois Millet's The Gleaners (1857). Her memory of the sky on the morning of October 30, 1912, suggests that Mary Allen kept a lookout for the conditions that would result in just such a depiction. "The sky I have been watching for from day to day-appeared with a promise of staying," she noted in her journal, "I rushed to the hotel for the horse-packed up the kit-swallowed an early dinner-and-went forth." Mary made her way to "the places I had in mind" and came, "upon some Polish women helping their spouses gather onions, and took some pictures of them. They are true peasant types. One man understood Eng-enough to help translate; vaguely-The women hadn't a glimmer-They worked rapidly along the rows-I had to shift the camera to follow with varying success-..."1 Mary Allen later stated, "I would rather do country folk at work than anything else in the world. Nothing is more difficult-than to get them in good poses-and unconscious."2 With her camera, Mary Allen transformed the arduous nature of a day bent to the task of harvesting into a romanticized view of peasant work.