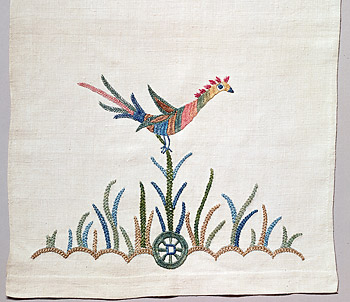 Polly Wright was an 18th-century needleworker whose design inspired the parrot stitched onto this Blue and White Society piece. Margaret Whiting seems to have been charmed by Polly and her birds. The following description of Polly's parrot suggests just how successfully this Blue and White Society embroidery captures the quirkiness that Margaret saw in Wright's original work. As Margaret describes Polly's ornithological creations,

"The designer had recourse to birds as occasional aids to invention. They were birds of no particular species though often delitefully dowered with ornamental wings and tail feathers. The dove was perhaps the nearest relative, though once at least a parrot made itself gay with many colored bands of red and yellow. Polly Wright thrust this strange ornithological specimen into her spread design, and it does not seem possible that there ever was another. Very gawky with a picot edge all about its elongated body and neck which was evidently intended to indicate feathers, it is perched upon the top of a stick, most precariously balanced on its long inadequate legs and stabs its bill that is like a unicorn's horn at the grass blades surrounding it."1