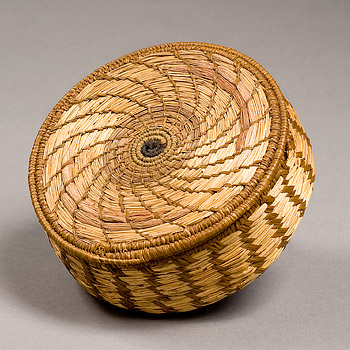 The Pocumtuck Basket Makers took their name from the first peoples whose homeland included the territory upon which Deerfield was built. While their baskets do not emulate Native American basketry, the Pocumtuck Baskets Makers were inspired by an interest in Native American handicrafts, and were "ambitious to find material growing in woods and fields after the manner of the Indians so trips were made after grasses, cat-tails, corn-husks, pond lily stems, maidenhair fern stems and the like."1

This basket was constructed of raffia and sweet grass. Indian sweet grass, according to Deerfield basket weavers Gertrude and Mildred Ashley, "is found in the salt marshes near the coast, and though rather expensive, a little of it goes a good ways."2