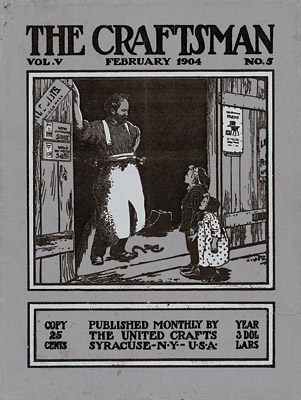 Frances and Mary Allen were the first artists ever credited by the Craftsman Magazine for the image appearing on its cover. This February 1904 cover was based on a photograph entitled A Crack with the Blacksmith taken by Frances Allen c. 1900.

Good design was a key concern for Arts and Crafts artisans, and it is clear that Deerfield artists were aware of larger national trends. Not only did the Deerfield Industries ensure that copies of important Arts and Crafts journals such as The Craftsman and Handicraft, were available to its members, Deerfield artisans had access to design-focused lectures and could view relevant traveling exhibitions in town as well. During a summer lecture series for Deerfield's craftspeople in the summer of 1905, for instance, potter Leon Volkmar presented a talk entitled "Modern Pottery," illustrated with examples from the Volkmar kilns. George Wharton James, associate editor of The Craftsman, showed "rare specimens" while presenting "The Poetry and Symbolism of Indian Basketry." James Hall of the Adler School of Ethical Culture, gave an illustrated talk on "The principles and Applications of Design," based on the ideas of author Denman Waldo Ross whose art instruction manual A Theory of Pure Design: Harmony, Balance, Rhythm was published in 1907. In 1906, painter and Deerfield summer resident Augustus Vincent Tack presented a "very interesting talk on the general principals of Art and design, and used some Japanese prints and textiles to illustrate the beautiful considerations of color which could be obtained" to Deerfield Industries members in the Village Room. Among the exhibitions to travel to Deerfield was, in 1909, a National League of Handicraft Societies exhibit featuring weaving, stenciling, lace and embroidery displayed at the Sheldon House, the historic home of weaver E. Jane Hawks.

The designs of the Blue and White Society suggest that Margaret Whiting and Ellen Miller were well acquainted with the design principles advocated by Arthur Wesley Dow in his oft-reprinted Composition: A Series of Exercises in Art Structure for the use of Students and Teachers first published in 1899. Potter Chauncey Thomas, who worked and exhibited in Deerfield 1909, 1910 and 1911, had studied with Arthur Wesley Dow at the Pratt Institute.