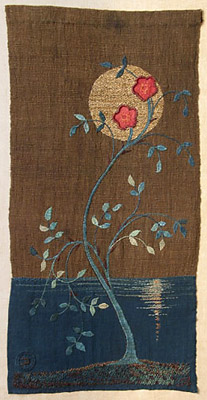 In looking to the cultural history of their nation for inspiration, Deerfield artisans were walking in the ideological footsteps of the central figure of the British Arts and Crafts movement, William Morris (1834-1894). An influential artist and writer, Morris turned to an idealized version of his own country's medieval past for the principles that guided his reform ideas, and the motifs out of which his own creative work blossomed. Deerfield Society of Blue and White Needlework designer, Margaret Whiting pays homage to this influential artist and thinker with her embroidery, Two Red Roses Across the Moon, named for the haunting refrain sung by a lady and heard by a battle bound knight as he passed by the hall in which she lived. The lady, the knight and the song are from a William Morris poem of the same title, first published in 1858.