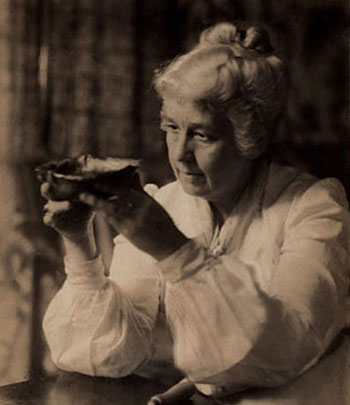 The leading intellectual light of the Deerfield Arts and Crafts movement, Madeline Yale Wynne was the founder and long-time president of the Society of Deerfield Industries. In introducing town residents to the efforts of the Chicago Arts and Crafts Society, she told a story of a group of children who vied to eat from a misprinted transferware plate, the one printed "with half a donkey, [which the children wanted] simply because it was different."1 Madeline explained that "This desire for the unusual, this craving for individuality in our belongings, was exactly what the artist and craftsman were striving to supply." Her ideas had a great impact on future Deerfield crafters. "When we came from this meeting" weaver Eleanor Arms remembers, "[we] were all saying to ourselves 'What can we do, What especially, can I do?'"2

Madeline began her art studies with Deerfield, Massachusetts painter George Fuller in 1872. Her training ultimately included work at the Pennsylvania Academy of Fine Arts, Philadelphia, the School of the Museum of Fine Arts, Boston, the Art Students League, New York and extensive travels in Europe. Beginning in 1886, Madeline spent her summers in Deerfield and her winters in Boston. She and longtime friend Annie Putnam gave up their Boston studio in 1890, and Madeline began, with her family, to spend winters in Chicago where she became central to the city's thriving art scene. Following a successful crafts exhibition at Hull House, Wynne and eleven others founded the Chicago Arts and Crafts Society in the fall of 1897. In 1901, Madeline founded the Deerfield Society of Arts and Crafts. She was a vice president of the National League of Handicraft Societies when it held its first annual convention in Deerfield in 1908.

Madeline Yale Wynne expressed herself through many forms including metalworking, painting, woodworking, basketry, and writing. The artist was remembered as "so much more than the sum of all her varied gifts-- a beautiful woman, with singular exceptional charm of voice, manner, gesture; artist, craftsman, unique story-teller, writer of prose and poetry (too little known); loving daughter, sister, mother and most satisfying friend."2