Introduction to
the Arts & Crafts Moment
in Deerfield 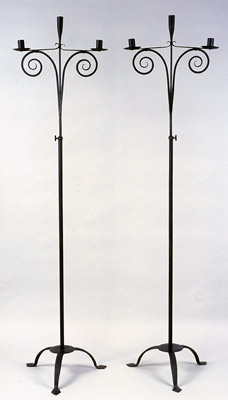 In the early 20th century, Deerfield, Massachusetts, was home to a distinctive manifestation of the Arts and Crafts Movement, and to the talented group of, often female, artisans who cultivated it. An international phenomenon, the Arts and Crafts was a social and design reform movement that began in Britain in the 1860s and sought to elevate fine craft work to the arena of Fine Art. Within the context of an increasingly industrialized western world, the Arts and Crafts movement encouraged a return to handcraftsmanship and a focus on simple designs displaying a fundamental respect for the nature of the materials used in their construction. The names of British art critic John Ruskin (1819–1900) and his former student, William Morris (1834–96), a designer, writer, and craftsman, became synonymous with the movement. Arts and Crafts took hold in America in the 1890s. In New York, for example, Gustav Stickley (1858-1942) and the Craftsman Workshops (1904-1916) created a style of straightforward furnishing whereby ornament was integrated into the design and functioning of each piece. Among the most famous American Arts and Crafts pottery firms are Greuby (1897-1909) out of Boston and Rookwood (late 1870s-1960) of Cincinnati. In general, American Arts and Crafts sought to revive the craft traditions of an earlier time. Arts and Crafts artisans desired to create useful art objects featuring quality workmanship, natural materials and a carefully-considered use of ornament. Responding to the problematic social issues which had arisen alongside industrialization, American Arts and Crafts theorists (including Deerfield's own Madeline Yale Wynne (1847-1914)) called for fundamental changes not only to design, but also to working conditions, worker compensation, and opportunities for women. Organized Arts and Crafts groups across the nation capitalized on localized resources and materials to offer, each in its own way, unique working models aligned to the Movements’ larger principles and concerns. Begun in 1896, the Deerfield Arts and Crafts movement was one of the first in the nation. 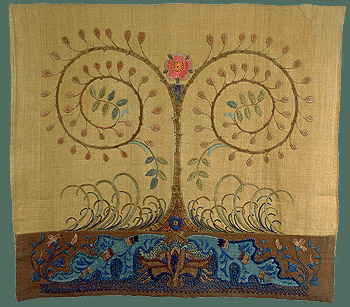 The Blue and White Society's The Last Rose of Summer, 1908, designed by Ellen Miller; linen on linen, 26 x 29 in. Memorial Hall Museum, PVMA

Deerfield’s history and its situation at the turn of the twentieth century made it ripe for bringing together the Colonial Revival and Arts and Crafts. Interest in the country’s colonial past intensified in the decades following the Civil War and the Centennial. Deerfield was distinctive for its colonial homes and heritage stories, and for the collections of colonial crafts housed in its museum Memorial Hall. The presence of these colonial craft objects, houses and stories intersected with a flowering of talent, inspiring burgeoning interest in production techniques and products that had seemed previously passé. Deerfield’s first Arts and Crafts initiative, the founding of the Deerfield Society of Blue and White Needlework, took its initial inspiration from the region’s extant colonial embroideries. Up to 30 women participated in the Blue and White Society; their achievements provided an early model of women’s economic success. Another group, The Society of Deerfield Industries produced a range of lauded products — baskets, rugs, netting, furniture, metalwork (wrought iron, decorative arts, and jewelry) and photography. Each year, Deerfield’s colonial heritage and its thriving Arts and Crafts activities drew thousands of tourists to the town. The Deerfield Arts and Crafts movement remained active into the early years of the Second World War.