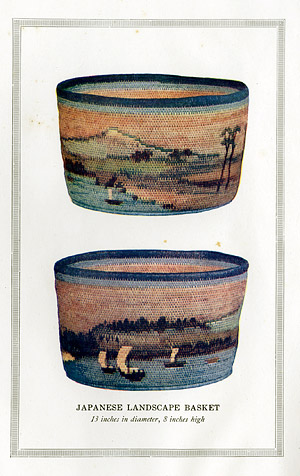 In 1914, the Springfield Republican praised Gertrude Ashley "whose study of Japanese art is reflected in the quality of her designing and the almost oriental feeling that is caught in her color harmonies." While the influence of Japanese art can be seen in the metal work of Madeline Yale Wynne, the embroidery of the Deerfield Society and Blue and White Needlework and the weaving of Luanna Thorne, raffia basket maker Gertrude Ashley based her Japanese Landscape Basket on a specific source, Utagawa Hiroshige's "Bay at Kominato in Awa Province" from his mid-19th-century Famous Views of the 60-odd Provinces, transforming its vertical orientation into a the horizontal scene embedded into the surface of her woven work. The basket's current location is unknown, but the above photograph was published as the frontispiece to Ashley's Raffia Basketry as an Art (1921). The author believed the raffia landscape basket to be "the most ambitious attempt at originality," and advised that it "should not be attempted until one has had much experience as it requires much time both to design a subject which would be sufficiently interesting to spend the time to execute it. Some of my landscape baskets have required four hours to complete one row."