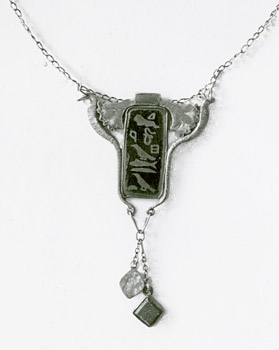 Annie Putnam displayed this necklace at the 1906 Deerfield Arts and Crafts exhibition. Shown here in an Allen Sisters photograph, an account of the piece appearing in the Springfield Daily Republican can assist our imaginations to color to the picture:

"Miss Putnam has...a pendant hanging from a fine gold chain composed of Cleopatra's cartouche, set in a border of golden asps and green enamel lotus flowers, with two hanging bits of mosaic from the Egyptian queen's palace."1(A cartouche is a protective symbol often bearing the name of a pharaoh, in this case Cleopatra.)

It is likely that Annie learned the craft of metalworking from her friend Madeline Yale Wynne. According to the Greenfield Recorder, "the fame of these women has reached so far that they are constantly having laid before them the unusual in gems from all parts of the world and their command of rarities is shown in the stones about which they build the metal with sympathetic, appreciation of their needs."2 Madeline incorporated an Egyptian scarab into a brooch found elsewhere on this website.