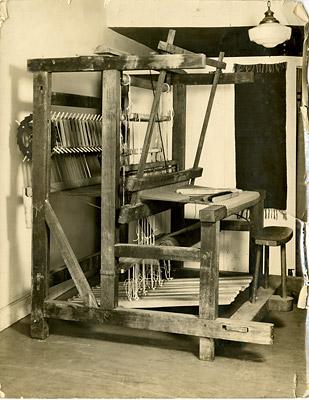 Luanna Thorn worked on several looms set up in her 18th-century home. She reserved one for weaving bedspreads and rag rugs, and another for table runners. Linen pieces were created on her Shaker bonnet loom. Luanna's daughter Elizabeth remembers that "no one else was to touch this loom," which her mother particularly prized and upon which the weaver "did pieces with her favorite flower the iris, together with the dragon fly. There was also one design of an apple tree in fruit--the fruit were put in with a knot like that used in oriental rugs.... Mother did her own dyeing. All the threads came in skeins and had to be converted into bobbins-- small ones for the shuttles and big ones for the warping bars."1