Emma Henry's netted textiles, designed and constructed to adorn old canopy beds and displayed in her home and shop, offer a perfect example of how Colonial Revival thinking effectively altered popular notions about America's past. Evidence suggests that netted bed treatments first appeared in this country in the late 1830s.1 Further, it wasn't until the early years of the 20th century that the netted bed tester came to characterize a properly-decorated colonial bedroom. The strength of this association is suggested by the eighty-year long Deerfield market for netted testers, first created by Emma Henry; the routine appearance of these snowy white, fringed canopy treatments in Colonial Revival photographs (most notably those of Wallace Nutting), and their subsequent widespread use in historic house museums.

In addition to canopy treatments, customers could examine white-on-white knotted and tufted bedspreads and smaller netted textiles in Emma Henry's shop while listening to her describe the old-time origins of her patterns. 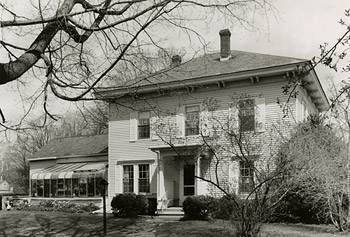