Begun in 1896 by Margaret Whiting and Ellen Miller, within ten years the Deerfield Society of Blue and White Needlework sustained the part-time employment of between twenty-five and thirty women, some single, some married, almost all of whom lived in Deerfield, Massachusetts. The fruitfulness of an individual embroiderer's experience with the Blue and White Society depended upon her level of skill, and her quickness with the needle. One local newspaper found, an "East Deerfield girl told her friends here that she could make more money at it than at school teaching. On the other hand, other workers say that they cannot earn over 10 cents an hour. It is stated by one of the leaders in the work that the average worker can earn about 15 cents an hour, while some who are unusually skillful can earn about 20 cents."1

The priorities of the Blue and White Society are reflected in a statement written by Margaret Whiting in 1900: "No craft can continue that is not the inevitable result of the artistic impulse. No craft is worth cherishing that does not owe its energy to the pure desire to serve Art."2 With the creation of a beautiful and high-quality product as the organization's ultimate aim, Deerfield Society of Blue and White Needlework embroiders were carefully trained. Once in full possession of their craft, they were allowed to complete most of their work at home. The exceptions to this were large embroideries which required the work of more than one needleworker. As photographer Mary Allen, one of DSBWN's four original embroiderers, explained, "When some large piece, like a bedspread or tablecloth, is on the way two or three meet and work together. No one is tied to hours or to place, but it is to each one's advantage to work as rapidly and as carefully as possible, for in the interest of the body politic, a carelessly wrought piece is not accepted and the pay received is in proportion to the work accomplished."3

For the thirty years of its existence, local embroiderers brought the exquisite designs of Ellen Miller and Margaret Whiting to life. In 1926, an aging Whiting and Miller retired from business and brought the Deerfield Society of Blue and White Needlework to a close. 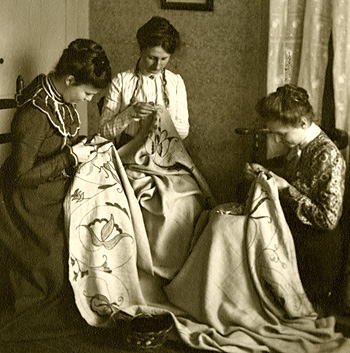