While many Deerfield Arts and Crafts artisans looked to the colonial past for inspiration, the original Deerfield Basket Makers were inspired by the remembered past. It was well-known photographer and Deerfield enthusiast, Emma Coleman who reintroduced the craft of palm leaf basketry to the town in 1899. As she saw it, "The Deerfield women of fifty years ago, as well as those of other inland Massachusetts towns, used to braid palm-leaf hats. In Petersham the hat-makers had become basket-makers. Why not here?"1

In the fall of 1899 Coleman held a 'braiding bee' in the ballroom of Deerfield, Massachusett's historic Frary House, the summer home she shared with C. Alice Baker. A few of the attendees, such as Eleanor B. Stebbins who had been "set at...regular 'stents' at braiding palm leaf after school," remembered earlier palm leaf basket weaving skills.2 Others tried the craft for the first time. Soon, the Deerfield Basket Makers expanded their choice of materials, and began fashioning a great variety of baskets from reeds, willow withes and Georgia pine needles. By 1906, there were between 50 and 75 Deerfield Basket Makers. The group contributed over 1,000 baskets to Deerfield's summer exhibition in 1908.

Deerfield Baskets were originally sold by Ellen Arms, the mother of weaver and basket maker Eleanor Arms. Between 1905 and 1920, they could be purchased at the 18th-century home of Eleanor B. Stebbins on Albany Road.The Deerfield Basket Makers were one of two basket making groups active in the Society of Deerfield Industries. The other group, the Pocumtuck Basket Makers, worked with raffia, grasses, and corn husks. 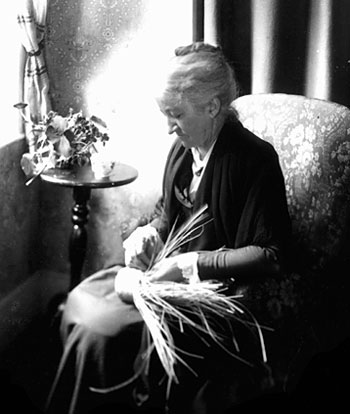